Disclosure:  This post is both broad and detailed so that interested analysts and journalists can gather key facts and form their own opinion.   Reviewing incredible schemes such as this orchestrated by Robert Mercer and Jim Simons often attract teams of analysts and reporters.  This post is original fact checked independent research available free on the internet.

All three beers are distributed by Portland based Columbia Distributing, one of the nations largest beer distributors, which was purchased by the Jim Simons controlled investment fund Meritage in 2012.  Simons along with Robert Mercer is Co-CEO of the $100 billion Rentec hedge fund.

While Meritage CEO is listed as Nat Simons, Jim Simons son,  the elder Simons holds the controlling ownership position per SEC filings, owning more than 75 percent of the Meritage fund.

This analysis will unravel the relationship between Rentec’s Medallion fund, its company retirement plan,  the Meritage private equity fund, which purchased Columbia Distributing in 2012, and numerous tax exempt foundations including those of Jim Simons, Nat Simons and Robert Mercer.

The key to understanding this financial engineering feat is analyzing the Medallion fund, which is managed by Renaissance Technologies.  This hedge fund is indeed the unifying thread.

The Medallion Fund, an employees-only offering for the quants at Renaissance Technologies (Rentec), is the blackest box in all of finance, according to Bloomberg Markets.  Robert Mercer is Co-CEO with Jim Simons.

The only investors in the fund are employees and their related foundations.  The fund’s primary broker is Deutsche Bank, see related post for important background blog.billparish.com-deutsche bank.

Deutsche Bank has been mired in numerous major controversies and was the lead bank in the Russian based “mirror trade”  scandal.  The bank is also President Trump, Robert Mercer, Jim Simons and Jared Kushner’s primary banker.  See Bloomberg story regarding mirror trades here. The Russian Banker Who Knew Too Much – Bloomberg

In but one example of the Medallion funds influence, the Guardian newspaper recently did an expose explaining how Robert Mercer funneled more than $70 million of Medallion gains through Mercer’s tax exempt foundation to support the political activities of Steve Bannon.

Mercer indicated he will resign as co-CEO of Rentec a few days prior to the Guardian story appearing.

Rentec’s Medallion Fund is the sole investment in Mercer’s foundation.   And all gains from this investment were tax free since sales were done within the tax exempt status of the Mercer foundation. Think millions of trades at Deutsche Bank that would otherwise be taxed at ordinary income rates due to their short term gain character.  Is that in itself not brilliant?

Yet rather than sinking into politics, which is a “wash” since Simons was a big Clinton supporter and Mercer was President Trump’s primary backer, let’s use beer as our guide to understanding this amazing scheme.

Also note that investors should be sensitive to offshore funds like Medallion, regardless of the posted returns.   Far too many companies and funds are now based in Bermuda, which certainly saves on taxes yet also introduces new risk factors due to lack of oversight.

A key lesson from Enron was that moving activities to offshore entities, and a related reduction in accounting and other forms of oversight, can disguise weaknesses.

Robert Mercer Borrows From Partner’s Son via the Meritage Fund, the fund in which Columbia Distributing is its largest investment?  Is Robert Mercer, like President Trump, financially stressed?

Curiously, Bloomberg reported that Billionaire Robert Mercer took out a significant loan from his partner Jim Simons son, Nat Simons, via Nat’s Meritage investment firm in early 2017.  How strange is that, for a billionaire?

As part of the loan deal, according to Bloomberg, Mercer pledged all his Medallion holdings as collateral.   There was also a significant withdrawal from the Rentec retirement plan, in which Mercer participates.  It is not clear if the primary retirement plan distribution was for Mercer.

At least six Rentec executives made borrowing arrangements in 2017 as the Medallion fund was looking for capital, which can mean two things.  The first is that new opportunities are available for investment, as Bloomberg implied, and second that some investments went badly and the fund is under-capitalized.

While the Bloomberg story indicates Meritage made the loan to Mercer, public documents indicate that in actuality Mercer took the loan out from his partner Jim Simons, a big Clinton supporter.  This is because Jim Simons effectively controls Meritage via an offshore family revocable trust, see SEC filing below.

Such revocable family trusts use personal social security numbers until the granter dies, at which time a trust tax id is created.   Note the xxx-xx-xxxx listed as the Tax ID.  Jim Simons son, Nat Simons, may operate Meritage, yet dad’s Bermuda based trust appears to own it with a stake exceeding 75 percent.

Rentec and Meritage Are Bound at the Hip

The following additional SEC report indicates that Meritage keeps its “books” at Rentec and like Rentec uses Deutsche Bank as its prime broker, further highlighting how close the two are.

Back To Following The Beer:

Quibble you may, yet Portland, Oregon is beer capital USA.  Nothing can touch the town in terms of the depth and variety of beer.  There is Shakespeare Stout, lavender, ginger beer and of course all the classics including Miller Lite and Budweiser.

How wacky is that?  In the midst of a heated debate regarding tax reform, neither the Democrats nor Republicans are addressing the key issue.  That is, US based companies like Columbia Distributing being bought by private equity and hedge funds and having them moved to tax havens for taxation purposes.  Who can compete with that tax rate of zero?

This also explains why there are almost 50 percent fewer publicly traded companies than 10 years ago.

The current tax reform proposal rewards takeovers by large pass thru partnerships via a significantly lower rate yet forces smaller family partnerships to use much higher ordinary income rates.  As proposed, this plan is therefore the greatest jobs killer ever proposed.

Perhaps Mercer, Simons and their assistants are all brilliant yet the public, including those dropping $5 for a Shakespeare Stout or $2.50 for a Miller Lite, deserve a little more truth in labeling with respect to taxation.

Oregon based Columbia Distributors, which dominates the west coast market and is one of the nations largest beer distributors, owned for decades by the Maletis family, was sold to Meritage in 2012.

Meritage principals now refer to Columbia as a “wide moated” business, a fancy way of saying an abusive monopoly in which they can made or break a brewery via inclusion or exclusion.

It is not known how pay and benefits have changed for Columbia’s 2,500 employees, how much has been outsourced and how much tax revenue the State of Oregon has lost given the firm’s primary owner is now a Bermuda based trust.

Politicians and journalists express no interest in revisiting these major takeovers, which for Portland included Berkshire Hathaway’s largest takeover in history when it purchased Portland based Precision Castparts in 2015, collaborating with an offshore Brazilian investment firm.  See post here for more details:  https://blog.billparish.com/2015/11/18/precision castparts

In 2010 Klein Ltd., a Bermuda based corporation with strong ties to Russian oil and gas interests, contributed more than 40% of Sea Change’s contributions.

Note that Nat Simons foundation is a big investor in his own Meritage funds along with the Medallion hedge funds his father and Robert Mercer manage.

Nat Simons, who commutes to work everyday in a 54-foot yacht, prides himself in running a hedge fund with investments in green energy technology.  He leaves Berkeley, Calif., however, where he lives, aboard his yacht, the Elan. The 1,550-horsepower, 54-foot yacht drops him at work and later picks up Simons, and brings him back.

Did US Enviros Take Russian Cash? | The Daily Caller

The legal filing included a copy of the employment agreement between Renaissance and its executive, David Magerman, highlighting the calculation of bonus in which 36 percent carry and 5 percent management fee are used even if the particular Medallion fund is a “no fee” account.

No fee accounts include the foundations, which appear to act as a brilliant scheme to extract cash, without penalties, back to principals at Rentec.  Put another way,  Nat Simons foundation, which is controlled by Jim Simons, is doing a fine job of generating fees for Jim’s Medallion Fund.

Again, it is the Medallion Fund’s profits that generated the capital for the Meritage fund, funds that Meritage used by acquire our beer distributor Columbia Distributing.

These people are far too smart and creative, in my opinion.   Their weakness is an absence of a moral compass given they don’t make a product or service but rather simply prey on those who do.

Below is a summary of Rentec fees per its 2016 SEC filing available at http://www.sec.gov 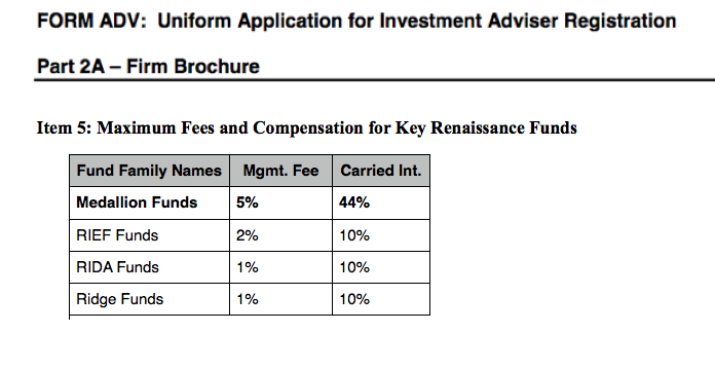 Rentec simply charges itself fees, via the Medallion funds which are exclusively owned by employees and their related foundations, 3-4 times what it charges outside investors.  These investment fees are not a taxable distribution from tax exempt accounts.

Note that these fees do not appear on the 990 filing income statements for the various foundations since they are extracted as “internal transactions” to the partnership.

Here is the employment contract of Rentec employee, Magerman showing his compensation.

Upon examining  all the various Rentec related organizations, both for profit and tax exempt foundations, it is clear that these people are brilliant financial engineers.   One has to imagine what they could accomplish if they sought to develop a real product or service.

Two years ago Bloomberg did a fascinating piece on GE’s corporate tax department, which included a staff exceeding 1,000.  Clearly this obsession with tax avoidance distracted GE, and its shareholders are now paying a steep price as the stock has declined almost 50 percent.

View all posts by Bill Parish